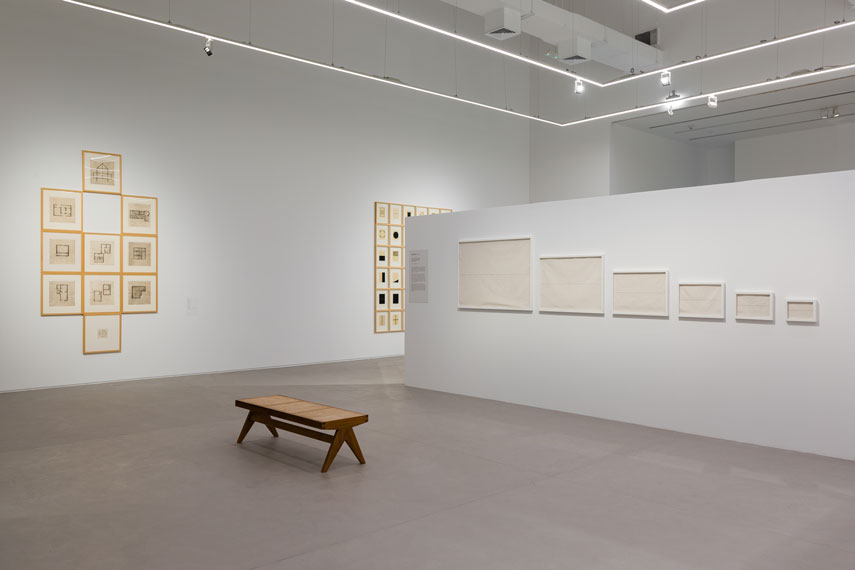 ‘Altered Inheritances: Home is a Foreign Place’ complicates notions of home and belonging with poetic and personal reflections on how geographical dislocation affects ordinary lives. The starting points are around the borders of South Asia, but with an awareness of impermanence and mobility as globally resonant experiences.

The exhibition title resonates with the condition of being South Asian in the Gulf; at home, but yet elsewhere. In Altered Inheritances – 100 (Last Name) Stories (2014), Gupta traces individuals who changed their last names either to succeed, or to survive. A linear presentation of images is layered with the reasons that names were shed, and then split in half, evoking a sharp break with the past. The words on each of the 36 monochrome woodcuts are “triggers for memory” in Zarina’s Home is a Foreign Place (1999), expressing a quiet yearning for a home she could not return to. The architectural staging of the two-person exhibition is inspired by the floorplan of Zarina’s childhood home, creating intimate spaces for works presented in both formal and conceptual affinity. In a video by Sophie Ernst, Zarina recollects how she and her family inhabited its spaces until forced to leave in the violent aftermath of 1947 when India became independent from Britain and Pakistan was cleaved from it, with borders that remain politically tense and divisive.

Zarina and Gupta attempt to rethink mapping as a comprehensible measure of either distance or allegiance, trying to understand its relationship to violence and separation. Their conceptual approaches echo each other in their leaning toward metaphor and allusion, visual restraint and in choices of material—string, cloth, paper, gold. While Zarina’s imagery remains abstract, Gupta’s work relates more directly to contested territories, informal economies and clandestine crossings; in Drawings Made in the Dark 2015, simple lines describe the dangerous paths across border territories. A resident of New York, Zarina responded to 9/11 with works that map a trajectory of violence from Delhi to Beirut into Sarajevo through Kabul, ending with the dark forms of the twin towers. These Cities Blotted Into the Wilderness 2003 takes its title from the nineteenth century poet Ghalib’s lament for Delhi. The companion piece An Altas of My World 2001 is titled after Adrienne Rich’s book of poems reflecting on hardship within America.

Zarina cites from Faiz Ahmad Faiz and Muhammad Iqbal, or references Mahmoud Darwish, melancholic yet revealing a complex engagement with her literary and intellectual world. Meanwhile, poems of resistance have been spoken and sealed into bottles by Gupta; these trapped words could become messages, preserved for a future generation to rediscover. The exhibition texts draw on poems by Meena Alexander, Agha Shahid Ali, Tishani Doshi, Kabir, and Zehra Nigah. Together, they suggest that while borders can tear apart and separate, there is yet an imaginative world beyond, in the words of Rabrindranath Tagore, “Where the world has not been broken up into fragments by narrow domestic walls.”

(b. 1937 - d. 2020, has lived and worked in New York). After receiving a degree in mathematics, she went on to study woodblock printing in Bangkok and Tokyo, and intaglio with S. W. Hayter at Atelier-17 in Paris.